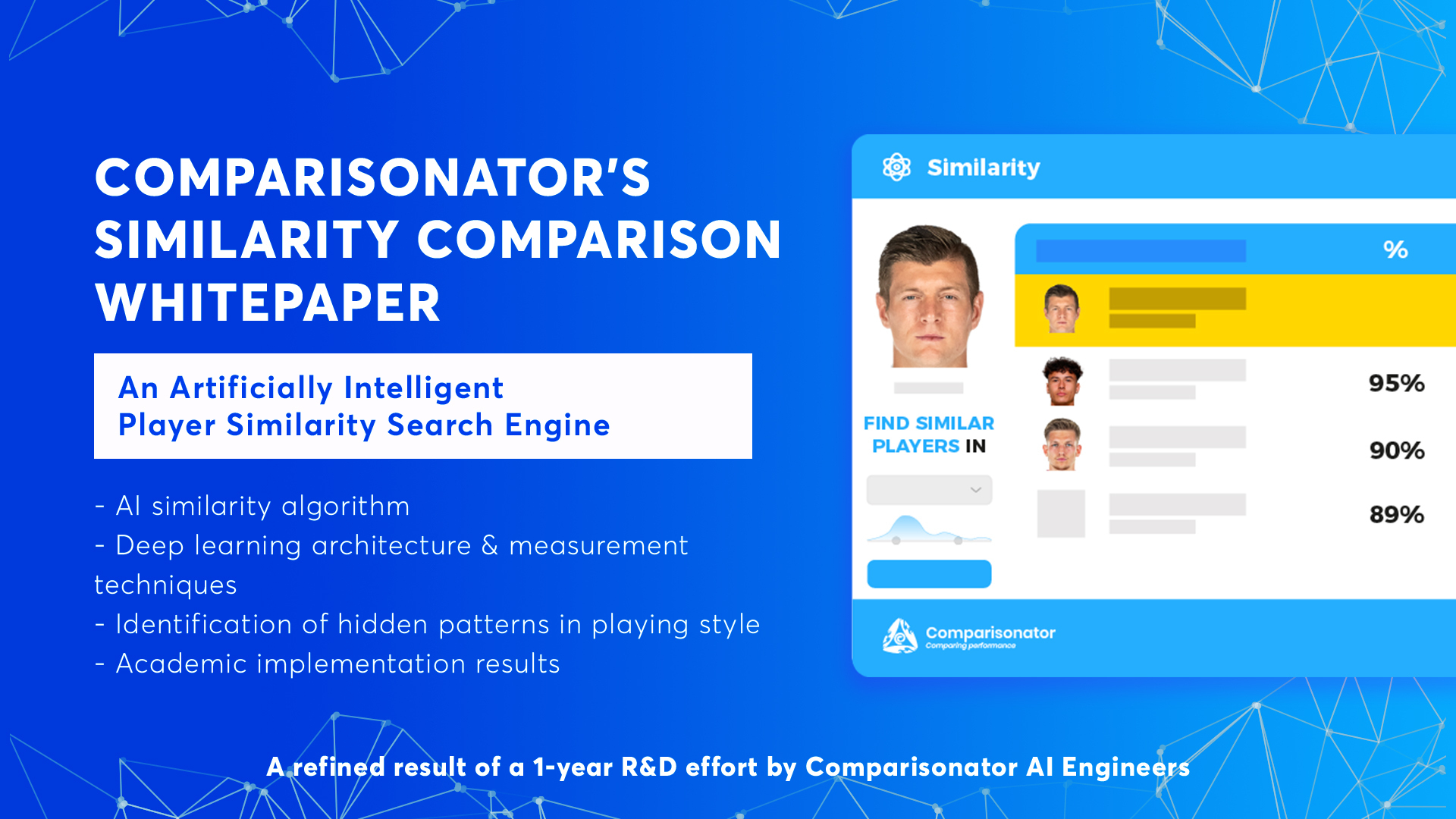 Comparisonator team is proud and happy to present its brand new home-bred football player similarity search engine developed by its AI engineers, a refined result of a 1 year R&D effort.

Finding the ‘twins’ in playing style and profile around the globe for a footballer you query.

Scouts always prefer to think in terms of ‘similarity’ while looking for talents, either for a hot prospect in youth teams or a world-class transfer candidate in top  1-tier leagues. However, this is a more cumbersome task than it seems, as the notion of ‘similarity’ is a highly subjective matter. Apart from sports analytics, due to this lack of universality, similarity measurements constitute one of the most complex subfields of all mathematical applications.

Comparisonator Team has put on particular emphasis on finding players with similar playing styles using on-field digital indicators. We were aware of the high degree of demand from our a priori discussions with numerous chief scouts all around the world. Therefore, our AI task force was mobilised to develop a satisfying product around a year ago. We opted to use all the state-of-the-art deep learning and data science techniques, which resulted in a promising and innovative architecture; both for our customers and academic research in AI.

Scouts and professionals from football industry always rest fully integral in the development of every Comparisonator product with their valuable feedbacks, which was also the case for our AI similarity algorithm. Thanks to this agile productive cycle, parameters of our algorithm are fine-tuned to the perfection.

At the heart of our algorithm lies the aim to be able to characterize something inherently complex and subjective : Playing Style. It seems as an uncomplicated and blazing fast task for professional football agents or regular audience to make the connection between playing styles of players : ‘… This right back reminds me Bissaka from Manchester United ..’ Unfortunately, this is an ambitious challenge for computer scientists to be able to develop such a thing using big stats data of footballers. That’s why we have developed Comparisonator Similarity Index Algorithm using state-of-the-art deep learning engine as its main core. As mentioned previously, playing style is a subjective concept. It can vary significantly from scout to scout. Our complex deep learning approaches ensures to minimize this bias, while trying to reveal not-so-obvious hidden patterns in playing style at the same time.

In this paragraph, we will briefly represent our approach, which types of data are used, the structure of our deep learning autoencoder and method of quantization of footballer similarity. Due to commercial secrecy, we do not explicitly precise the names of the statistical features and the parameters of the employed deep learning architecture.

First of all, we expect a player to have played at least 720 minutes on field for the intended period (season or half-season), to be able to have sufficient meaningful statistical data.

The backbone of our algorithm is an end-to-end  deep variational autoencoder, where it also includes convolutional/deconvolutional blocks to encode spatial data. The architecture was crafted rigorously, by specific choice of width-depth of layers, most suitable activation functions, training regime and tuning of hyper-parameters.

Besides the novelty of the architecture, a similar considerable effort was spent on the choice and engineering of the features. We have determined the best set of spatial and non-spatial features and their proper organisation and preprocessing in the model.

Further innovation exists also at the final step of our algorithm : statistical extraction of embeddings out of variational layer and the efficient reduction of dimensionality with proper methodology of these  overall semantic context  values. Finally, the similarities between players are measured based on this final set of reduced information.

The algorithm uses the latest artificial intelligence techniques to map the footballers with similar profiles in gaming style together; rather than taking directly their simple performance metrics, league competitiveness, age, valuation etc. Hence, rather than matching top players with their world-class peers or using simple key statistics such as goals, xG or assists; our deep learning algorithm learns a highly complex overall in-game profile for a footballer. This allows scouts to make interesting queries such as a young and affordable player, competing in low-tier leagues; who has an overall in-game profile like Messi. Or in case, a team loses a particular player due to transfer, injury or low performance; scouts can generate a list of candidates who has a matching style for him to replace

Outline of our  Deep Learning Architecture and Similarity Measurement Technique

The page you requested could not be found. Try refining your search, or use the navigation above to locate the post.