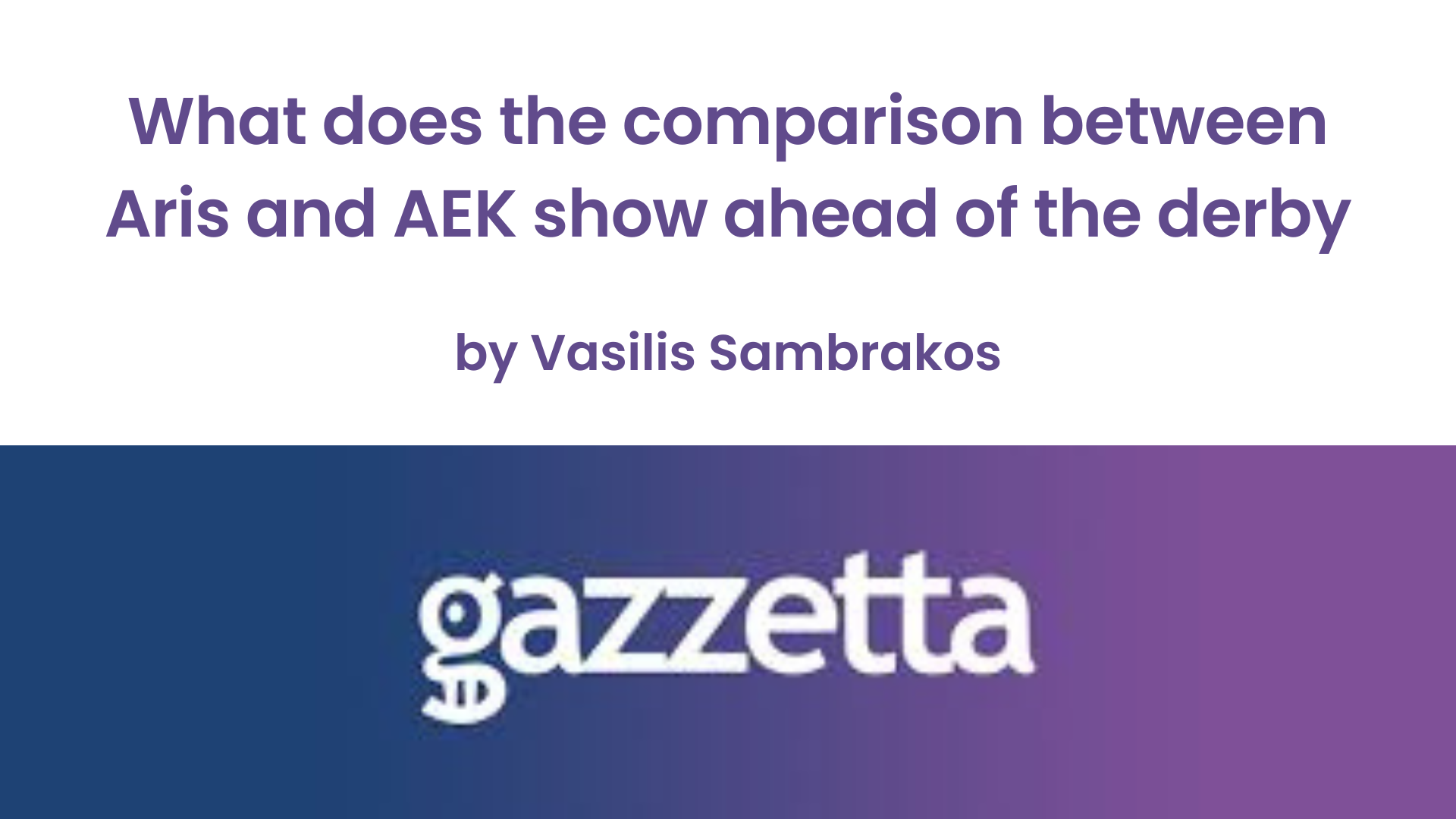 Comparisonator » Blog » What does the comparison between Aris and AEK show ahead of the derby?

What does the comparison between Aris and AEK show ahead of the derby?

Vassilis Sambrakos compares through the Comparisonator the data of Ari’s home performance with that of AEK’s away performance.

After 6 matches, the points difference that separates them – AEK’s +2 creates the feeling that so far they don’t have a big difference in efficiency. However, the comparison of the performance data of the two teams in the league shows significant differences in the quality of the game. Naturally, a team that works from the beginning of the season with the same coach, AEK, evolves its game model. The football players understand the principles of the game, get to know each other, familiarize themselves with the roles the coach gives them on the field and start learning how to solve the problems presented in the matches and thus AEK’s game evolves and improves. Naturally, the other team, which has changed three coaches in the same period, is still in the first phase of its game changes,

When one compares, through the Comparisonator, what Aris and AEK have done so far in the 6 matches, one finds an superiority of AEK in all parameters of the game. He circulates the ball better and has better quality possession, creates more attacks, more final attempts, scores more goals. And it excels in all parameters of the defense phase, as well as in duels – offensive and defensive.

In a more specific comparison, i.e. in a simulation of the conditions of the Sunday derby, when one compares the home performance of Aris with the away performance of AEK, one finds interesting findings. The general picture shows the superiority of AEK, but the differences are small. And when you study the comparison in greater depth, you find that, for example, AEK scores more goals in an equal number of shots per match, but Aris creates more classic chances (higher Expected Goals value). In the defensive parameters, AEK makes and successfully completes more defensive actions, but Aris concedes fewer goals and allows fewer classic chances to the opponent. Finally, AEK excels in all the parameters of the duels, as well as in those of the passing game.

Looking at the comparison one understands the challenge it creates for Mars. Alan Pardew has to get his team to cover the deficit in intensity, put them with an aggressive mentality in the duels and achieve greater concentration in order for Aris to make safer but also more quality possession of the ball. In this way, he will help his team to face the advantages of his opponent. However, you can easily understand the path of Matias Almeida in the preparation of this game. His vision will obviously be to maintain the image his team had in the first half hour of the last away game – in terms of the intensity of their play and their aggressive mentality in duels.

Given that we’re still getting to know Matias Almeida and this is his second away derby we’ll be watching, and at the same time we’re just getting to know Alan Pardew and we’re about to see him in a second home derby, what we have ahead is a very interesting game. Since we are beginning to understand the basic concept of Almeida, we expect an AEK that will enter “Vikelidis” to attack Aris from the beginning in both phases of the game – with or without the ball. So it will be very interesting to see how Pardew chooses to approach this game – ie what his strategy will be. If one thinks that “Vikelidis” will be full, he easily assumes that the English coach will take advantage of the emotional charge his players will get from the stands and call for an attack. But we said, Pardew is still being learned. In his first derby, with Olympiakos, in the first 30 minutes Aris held the ball more, made the same number of attacks as his opponent, but had no chances – only one shot off target. But in retrospect we had heard Pardew explain to us that in his first time on the Aris bench he was still trying to get to know his team and read the best option to manage the match – as happened in the second half. So that picture doesn’t make a rule about how Ares will manage home derbies under Pardew.