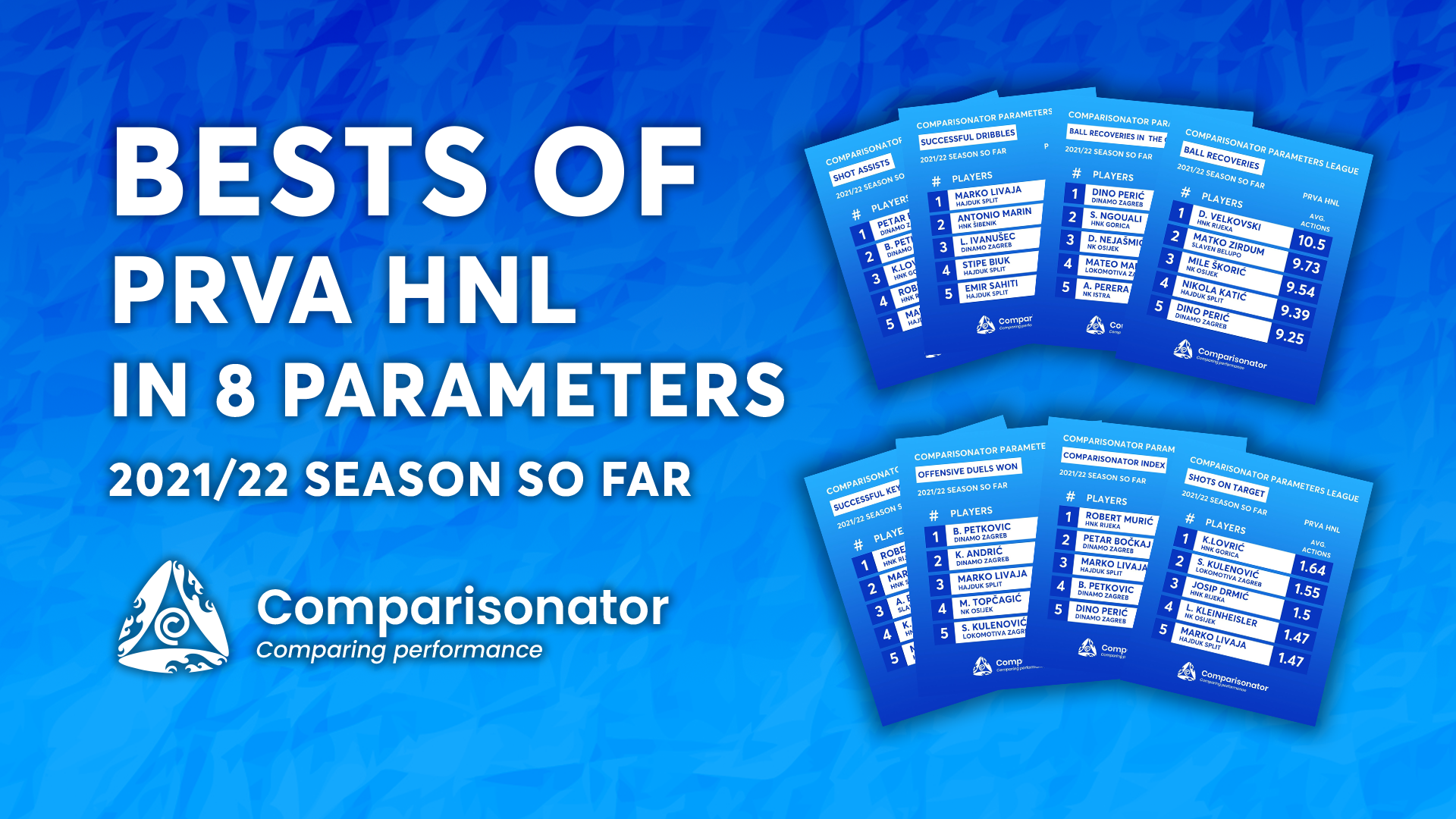 Comparisonator team analyzed the best players in selected parameters with their performances in the Croatian Prva HNL in 2021/22 Season so far.

In this analysis, the best 5 players in the selected parameters based on the matches played so far this season in Croatian Prva HNL with the Parameters League feature of the Comparisonator. These players ranked according to their per 90 min. averages on selected parameters.

In the “Comparisonator INDEX Points” analysis, which is calculated according to the statistical performance of the players this season; Robert Muric from Rijeka, became the best player in the league with 474 points per 90 minutes.

In the Shot Assist parameter, Petar Bockaj, who is transferred recently to Dinamo Zagreb with his successful performance in Osijek, is leading with 2.53 per 90 minutes. Bruno Petkovic is second with 2.31 Shot Assists per 90 minutes, while Kristijan Lovric is third with 1.7 Shot Assists.

Kristijan Lovric from Gorica is the best in the league in this parameter, with 1.64 Shots per 90 minutes. Sandro Kulenovic (1.55) from Lokomotiva Zagreb is in second place, and Josip Drmic (1.5) from Rijeka is in third place.

In the Successful Dribbles parameter, Marko Livaja is in the first place with a stat of 4.62 per 90 min. He is followed by Antonio Marin (4.6) from Sibenik and Luka Ivanusec (4.26) from Dinamo Zagreb.

Robert Muric is the best player in the league in this parameter, with 1.11 Successful Key Passes per 90 minutes. Sibenik’s Marin Jakolis (0.87) is in 2nd place, while Slaven Belupo’s Arijan Brković (0.83) is in 3rd place.

Rijeka’s Macedonian CB Darko Velkovski is the best player in the league this season, with 10.5 Ball Recoveries per 90 minutes. He is followed by Matko Zirdum (9.73) from Slaven Belupo and Mile Skoric (9.54) from Osijek in this parameter.

Dino Peric from Dinamo Zagreb is in the 1st place in the league with 2.54 per 90 minutes in Ball Recoveries in the Opponent Half. Serge Ngouali (2.53) from Gorica is in 2nd place, and Darko Nejasmic (2.21) from Osijek is in 3rd place.

In the Offensive Duels Won, which is the last parameter in our analysis, the ranking of the players is as follows: Bruno Petkovic (9.52), Kommen Andric (9.36), Marko Livaja (9.25).