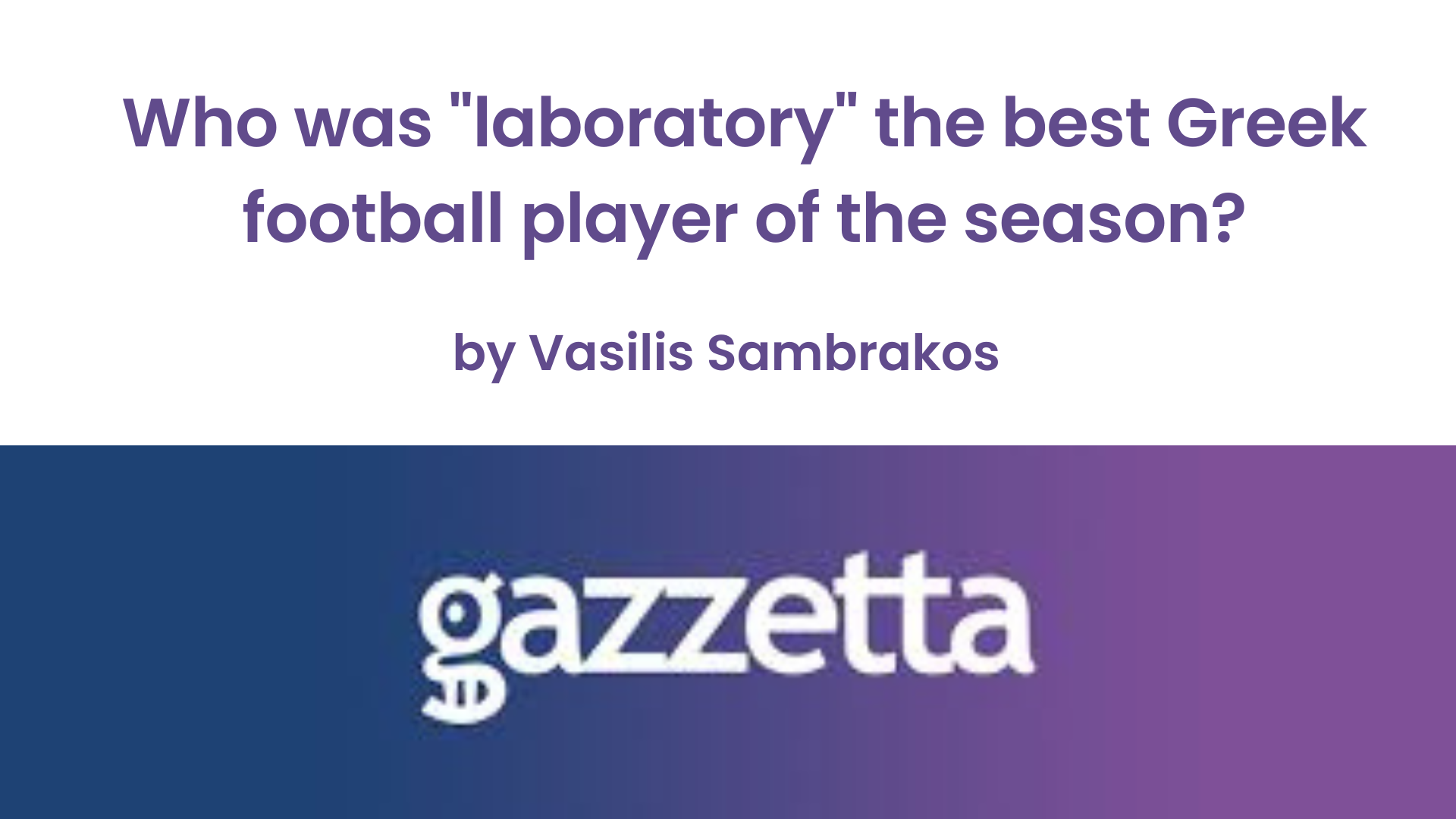 Comparisonator » Blog » Who was “laboratory” the best Greek football player of the season?

Who was “laboratory” the best Greek football player of the season?

Vassilis Sambrakos makes a list of the top 10 Greek footballers of the past season, based only on objective performance evaluation through a performance comparison platform.

What would be the list of the top Greek footballers in the season that ended, if it was formed on the basis of “clinical results”, that is, if it was based only on objective data – the performance analysis statistics? I entered this process by leveraging one of the tools provided to its user by Comparisonator – an international platform for comparing the performance of football players and teams. I asked the platform to create the list of the top 10 performing Greek footballers based on their overall performance rating, which it evaluates through hundreds of different performance parameters.

At the top of this list is Manolis Sialakas, a kid who had a very good championship with PAS and went as far as transferring to Saint Paul. He is followed by the Turkish Champion Tasos Bakasetas, and in third place is another player who had a very good championship in the Superleague with PAS, Yiannis Kargas. In fourth place is Kyriakos Savvidis, a defensive midfielder who started at PAOK and wandered around a bunch of Greek teams until he found himself in Slovakia and did, with Spartak Trnava, a very good championship. In fifth place is Dinos Mavropanos thanks to his season with Stuttgart, followed by Petros Mandalos, in a dark season for AEK, and in seventh place is Vangelis Pavlidis thanks to his season with Akmaar.

In 8th place is Alexandros Kyzyrides, a 21-year-old attacking midfielder who started from PAOK and was in Slovakia to get the chance to play in the league, with FC ViOn. The 10th round closes with Praxiteli Vouros, who had a very good season with OFI, and Zisi Karachalio, one of the best defensive midfielders in the Superleague, with PAS.

If the filter of the evaluation was the best performance per 90′ minutes, on the list, and indeed high, would be Kostas Tsimikas, Giorgos Giakoumakis, Lazaros Christodoulopoulos, i.e. footballers who did very good things while they played but did not have as many minutes of participation the players on the first list had. If the evaluation measures were different, i.e. if the comparison was made only between the players who participated in the top 10 European leagues, the list would be different.

Through this whole process, one realizes how great the possibilities are given by the technological development, which has unimaginably improved the analysis and evaluation of the performance in football, to a team that works methodically and modernly in the search for football players.

Tools like the “Recruitment Shop”, Comparisonator’s particular service, give you the opportunity of a very selective search in the global human geography of football.

That is, you ask, for example, the platform to show you left-footed players aged 20-24 with the most accuracy in crosses and the most efficiency in defensive and offensive duels, who hold a Community passport and play in the first division of national championships, and a list of dozens of options appears in front of you in seconds.

The result of this search is not your buy list – it is a list to watch footballers. That is to use the capabilities of a platform like Wyscout and see one by one all the crosses and all the duels of the footballers you have on your list. And then create a smaller list of those who beat you through data + highlights and start watching 5 full matches of each.

Somehow you arrive at a smaller list, those for which it makes sense to dig deeper and find the last detail that will answer the question of whether or not it makes sense to deal more with a football player and watch him and also meet him closely. Technical scouting of this type cannot measure the performance of the player in the “big matches”, nor his determination or his mental and spiritual elements which are not all reflected in the statistical parameters.

These will always correspond to a human eye. But the eye alone was never capable of analyzing the whole season or the whole career of a football player, and the human mind needed months to compare all the Greek football players playing football around the planet. Technical scouting now exists for all of this.

This is how teams today come to minimize the risk of seeing on their own pitch a different footballer than the one they thought they were getting when they signed a contract sent to them by an intermediary because “it’s an opportunity” or because “he suggested him to us, who knows”.