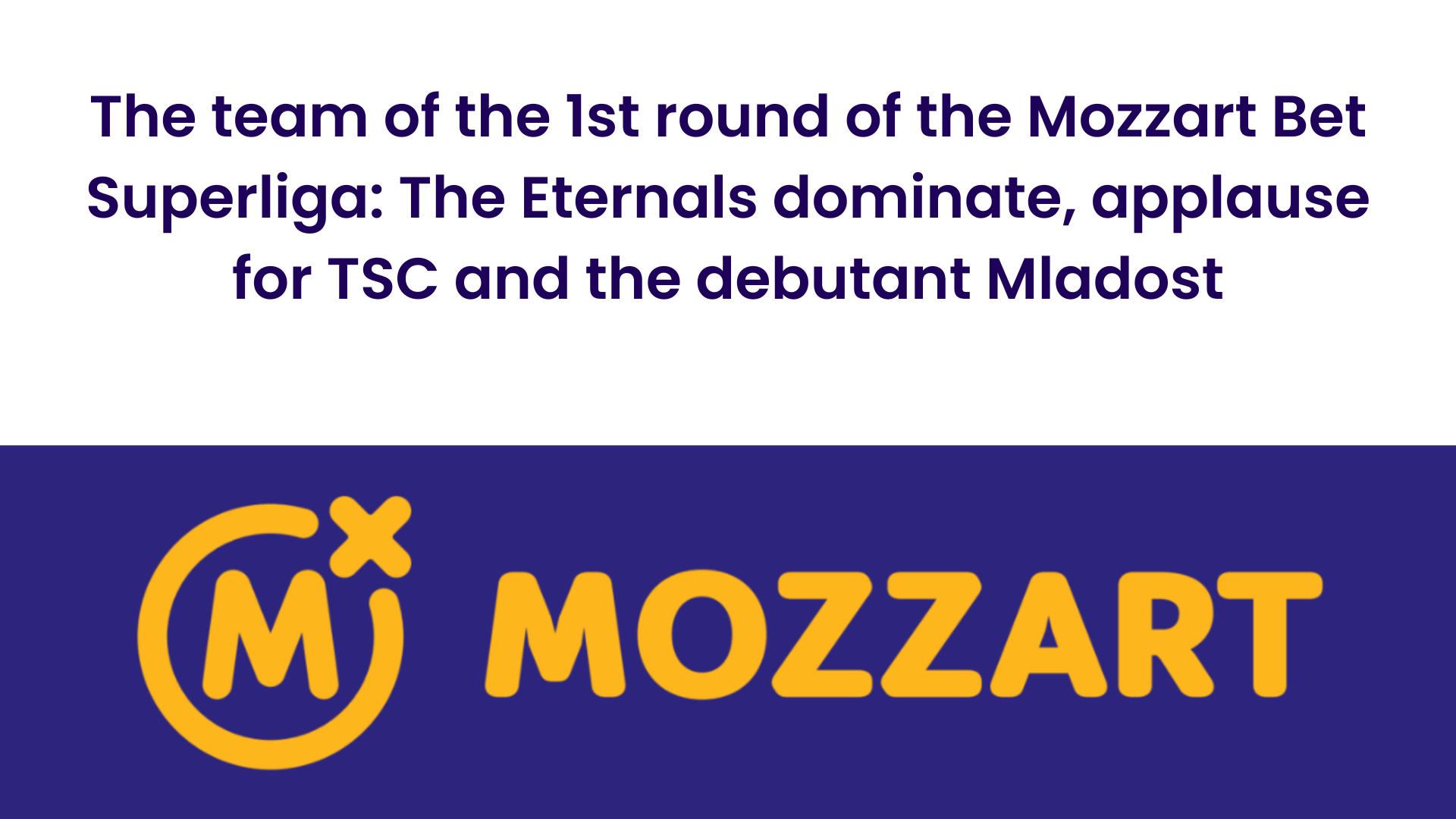 Comparisonator » Blog » The team of the 1st round of the Mozzart Bet Superliga: The Eternals dominate, applause for TSC and the debutant Mladost

The team of the 1st round of the Mozzart Bet Superliga: The Eternals dominate, applause for TSC and the debutant Mladost

There is also the “intruder” Stefan Hajdin

The victories of four clubs marked the start of the new Mozzart Bet Superliga season. Eternal Belgrade rivals have shown that they will be at a level above the competition again this year, TSC that many may have prematurely promoted Čukarički and Vojvodina as first favorites in the fight for third place – which could mean at least the group stage of the Conference League – while Mladost GAT in the Super League derby in the middle of Surdulica, they defeated Radnik, already a standard participant in the elite level of the competition, thus showing that they will not play the top spot for “older” clubs.

With that, those four results, along with one “intruder”, made most of the ideal team for the first round of the Mozzart Bet Superliga. Because football is still a team game and the result is more important than any statistical column. Then again, some players bounced back, let’s see which ones. In the 4-2-3-1 formation, it is still a favorite among coaches in the Superliga…

MILAN BORJAN (Crvena zvezda) 7: When Radnički was in a rush to play much more attractive football under the leadership of Tomislav Sivić than before, it was the goalkeeper of Crvena zvezda who prevented Aleksandar Katai’s early goal from being blown away and the visitors from Nis to win wings. He didn’t have much to do in the rest of the game, but Milan Borjan reminded us for the umpteenth time how important it is for a goalkeeper to stay focused for the entire 90 minutes. Even against objectively weaker rivals. Because if Radnički had equalized at 1:1, who knows in which direction the game would have gone. This is how it is, a comfortable 4:0 for the red and whites with Milan Borjan’s six saves, according to data from the statistical platform Comparisonator.

ALEKSANDAR FILIPOVIĆ (Partizan) 7: The newcomer in the black and white team immediately demonstrated to the fans how much he has matured during his four-year tenure in Belarus. He completely blocked Eliomar Silva, one of Javor’s most creative players, closed down the right side, repeated himself up front, and crowned his excellent debut in the Partizan jersey with an assist for Samed Baždar’s goal. If he continues like this, the fans will quickly forget Aleksandar Miljković.

GORAN ANTONIĆ (TSC) 7: Not only did he have a crucial contribution in stopping the potent offensive line of Čukarički, but the stopper of Topolski sports club also scored a goal for 1:0 and thus signaled to the Brđians that they flew too far before jumping. Goran Antonić had as many as 20 defensive duels – the most among stoppers in the first round, he won 12 of them, recovered 12 lost balls and commanded the visitors’ defense with authority.

STRAHINJA ERAKOVIĆ (Crvena zvezda) 6.5: Marko Gobeljić struggled with the fast-footed Stefan Mitrović at the beginning of the match with Radnički, but when Strahinja Eraković moved to the right flank in the formation with three stoppers, Nisli’s attacks slowed down significantly. Eraković got his chance at Zvezda because of the “bonus rule”, and now he is already acting as a dominant player. He managed to send nine balls into the last third of the opponent’s court.

STEFAN HAJDIN (Voždovac) 7: That’s the “intruder” from the beginning of the text, but Stefan Hajdin earned this privilege in the minimum game of Voždovac over Novi Pazar. Hajdin had the honor of scoring the first goal in the new season of the Mozzart Bet Superliga, he had as many as three shots in total, he closed everything defensively, as evidenced by eight duels won in defense, as many as nine interceptions and three balls confiscated in the opponent’s half of the field – the most among left backs. A very good start.

MIHAJLO BANJAC (TSC) 7.5: Goal and assist for Mihajlo Banjac in a convincing 4:1 away game against Čukaricki. And even nine successful dribbles. As many as 46 balls from his teammates went towards the 22-year-old Banjac, which only strengthens the impression that Mihajlo has grown into the first player of TSC. And he has grown with that role, he is not afraid to take responsibility, to pull the ball, to keep it, to pass it when he thinks it is necessary. A true leader on the field, the extended arm of Žarko Lazetić. And we can only hope that he will not change his midfield already this summer, because it is a pleasure to watch him in Super League matches. Along with Bukari, Nath and Petković, he was the only one of our reporters to receive a 7.5 rating for his performance in the first round.

NOVICA MAKSIMOVIĆ (Mladost GAT) 7: The first of the two players of the most pleasant surprise of the first round of the Mozzart Bet Superliga. Of course, we could have expected Novica Maksimović to strengthen the lines of Novi Sad Mladost, because he already did that in the Vojvodina team, which beat Sampdoria 4:0 a few years ago. Three balls confiscated in the opponent’s half of the field, eight interceptions, there was nothing spectacular, but the job was done.

OSMAN BUKARI (Crvena zvezda) 7.5: Goal on his debut in the red and white jersey, another regular one, but annulled due to the previously played penalty. Osman Bukari introduced himself to the fans in an excellent way, spread the game of Crvena zvezda with speed and created holes in the defense of Radnicki. He beat his rivals three times while dribbling, some will complain that he is not that effective in defense, there will always be a danger that he will be overshadowed by Mirko Ivanić or Aleksandar Katai, but for his debut – very good.

BIBARS NATHO (Partizan) 7.5: The number has changed, the impact on the team has not. He is still an Israeli soccer player who solves “small” games. At the beginning of the new season, additionally inspired by the “ten” on the back of the jersey. He again directed the game of the black and whites, assisted Petković for the initial advantage, in the moments when Javor threatened to score a goal that decisively broke the match, and among the fans it is already mentioned that, after the “seen” departure of Saša Zdjelar, he could become the captain. The first side in the history of the club.

MIHAJLO PETKOVIĆ (Partizan) 7.5: The biggest gain of visiting the black and white team in Ivanjica is the edition of the boy from the “class of 2004”. Especially in the first half, when he tried shots from distance, and one such shot brought him his debut in the Partizan jersey. The guy does not hesitate to take responsibility, enter the duel, shoot from various positions and in those first 56 minutes – as much strength as he had – and thus imposed himself as a serious option for a bonus.

MILAN MIROSAVLJEV (Mladost GAT) 7: The attackers mostly failed or were overshadowed by their colleagues behind them, but Milan Mirosavljev did his job. A goal and an assist for an unexpected victory in Surdulica, seven touches with the ball in the Radnik penalty area, as a clear indication of how dangerous he was. He also had 35 passes, the most among attackers, he won 12 duels in the attack, in terms of which he looks behind only Bojan Čečarić. If he continues in the same manner, Mladost will not only be the surprise of the circuit, but perhaps also – the surprise of the season.