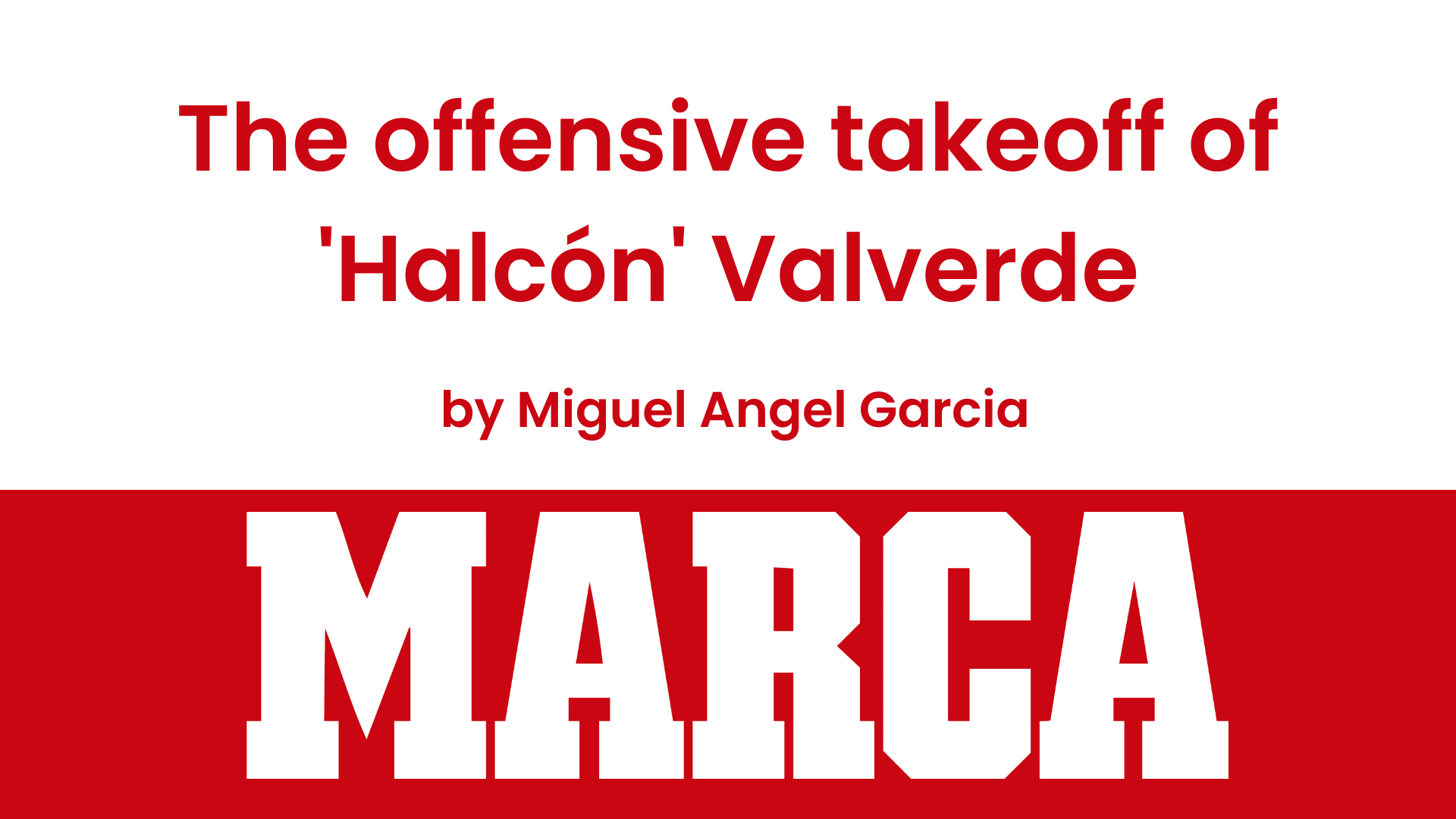 The offensive takeoff of ‘Halcón’ Valverde

No one can doubt that Fede Valverde’s start to the season has been spectacular . He is, along with Vinicius, the great name of Real Madrid’s great start. The ‘Falcon’ has found his habitat on the far right and, from there, he has improved his offensive performance to become a decisive player.

You only have to take a global look at your data from last season and this season to see the change. Except in dribbling, in the rest of the offensive parameters he has taken a leap forward .

It is true that it is necessary to see if he can maintain this level over time and that it would be fairer to do the comparison again at the end of the season to see if he has really improved. But, of course, so far we are seeing a new Valverde.

It is in the final meters where Fede has broken the mold . His new position, that of a winger , which he began to occupy at the end of last season, has had a lot to do with it . Ancelotti thought that from there he could get the best out of him and he was not wrong. The Italian used his versatility to test him in multiple positions until he found the right one. That is why this course, except at specific moments, has not moved from that right-handed end.

Since he has been there he has raised his level but, above all, he has proven to be a player who gives a lot to the team in the final meters . He has become much more decisive with the ball and, above all, in finishing.

To begin with, it is clear that his scoring contribution is greater . From not scoring a goal last year in the two main competitions to having four at this point, which means a goal every two games (in the League, specifically, it is a goal every 148 minutes). A ratio more typical of a center forward.

It is not only there, its effectiveness has been demonstrated. He has a great shot, but he had to believe it. “I told Valverde that if he didn’t score more than ten goals with that foot he had to tear up my card,” Ancelotti recently commented . The Italian has managed to get the Uruguayan to lavish more on the shot.

Only in LaLiga has he been able to score three goals in just 10 shots, of which seven have gone between sticks.

His new position makes him closer to the area , but he has also been smarter in choosing the place and time of the shot. He continues to line up from the right flank for the shot, but has generally tried from more advantageous positions. Proof of this is that the value of his expected goals has gone from 0.04 to 0.15 per game .

It is also noticeable in his red shots that last season he began playing more in interior positions and further back.

Not all his improvement is summed up in goals, but in all his offensive production . For example, he has already given the same number of assists as in the entire previous year (2) which, standardized for every 90′, reveals a notable difference, since it goes from 0.06 to 0.27. In other words, this season he produces an assist practically every three games, something he was very far from last season.

But the most striking thing is that, unlike the previous year, he is now performing above expectations when it comes to facilitating passes to his teammates. Expected assists (xA) , which measure the probability that a pass ends up being a goal assist, without taking into account the ability of the shooter and which help determine how decisive a player is through his passes, tell us that Valverde has taken a step forward in this direction.

While last season he accumulated an xA of 2.75, this one takes him to 1.15 . In other words, last season, based on the quality of his passes, he should have given almost three assists and not, so he underperformed, while this season he should only have one, so he is doing it for over.

At the same time, he has doubled his rate of key passes (all those passes that end in a shot). Valverde has gone from helping his teammates to finish a move once every three games (0.32) to just over once per game (0.67).

Valverde’s weight in this Real Madrid is beyond doubt and it only remains to be seen how high the White Falcon will fly.