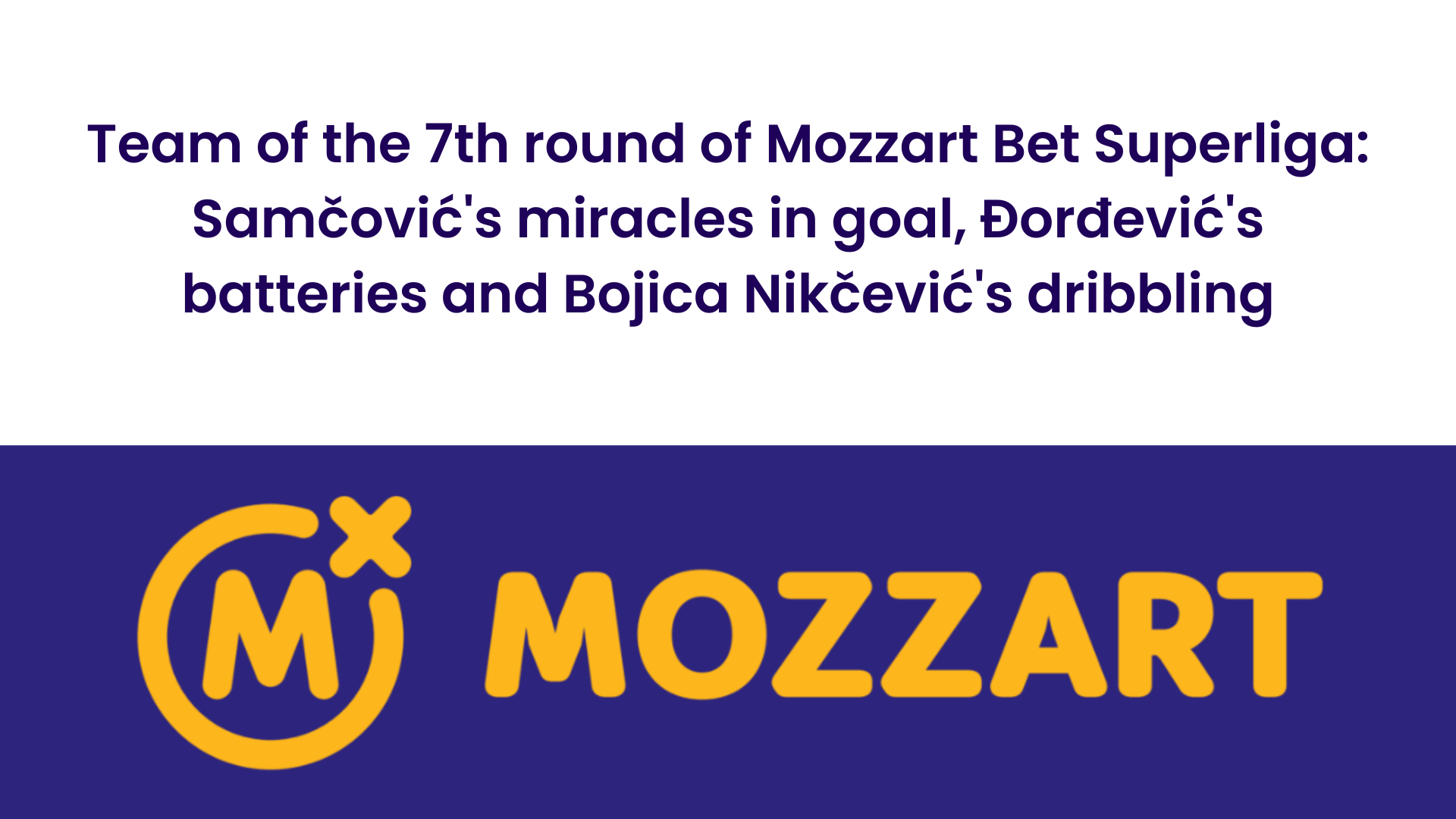 The return of Nišli to the ideal 11, with two representatives each given by TSC and Novi Pazar…

As for the postponement of the matches – that should be over, so starting next week we will be watching the eternal Belgrade rivals and their opponents on weekends, and not only in Europe. Their absence in the seventh round of the Mozzart Bet Superliga gave the others an opportunity to impose themselves, which some clubs reluctantly accepted, so this week Radnički from Niš presented three footballers, and Novi Pazar and TSC two players each.

There are also Mladost players from Lucan, Voždovac. Vojvodina, and Radničko from Kragujevac, but let’s not take too long, let’s start in order.

ŽELJKO SAMČOVIĆ (Mladost Lucani) 7: Did Milan Bojović score that goal for 1:1, did the red card for Veljko Simić make it significantly easier for the guests to return from Novi Sad undefeated, but there would have been no point for Mladost if Željko had not scored Samčović. The 19-year-old teenager from Kragujevac had as many as 22 shots on goal, and according to the statistics platform Comparisonator, he made six saves, one less than Aleksa Milojević from Novi Sad’s Mladost. But Milojević suffered a debacle in Bačka Topola, while Mladost took a point from favored Vojvodina, as Samčović shone in the shots of Simić, Topić, Kabić, Jamka and deservedly took the title of player of the match.

MARKO MIJAILOVIĆ (Voždovac) 6.5: We are used to praising his older brother Srđan from Čukarica, but in the match against Kolubara, Marko Mijailović also forced us to compliment him. The stopper, who got used to the position of right back in Voždovac, persistently broke through on the flank, demonstrated the ability to repeat himself in the attack – even had three shots, and five touches with the ball in the opponent’s penalty area – and in the end assisted Miloš Pantović for the winning goal Zmajeva in the 81st minute of the match.

SLOBODAN RUBEŽIĆ (Novi Pazar) 6.5: Slowly but surely, he stands out as one of the most dominant stoppers in the Mozzart Bet Superliga. Made his debut in the car team last week, now he’s only confirmed himself. Had ten aerial duels, picked up three balls in the opponent’s half of the field – the most among central defenders in this round – and was one of the most deserving of the fourth consecutive victory of Novi Pazar, who, despite all expectations, spends this week in fifth place in the table. No one expected it.

ALEKSANDAR PEJOVIĆ (Radnički Niš) 7.5: Penalty goal, assist and hit the crossbar twice. The captain of Radnica endured fierce criticism this summer, but along with Nikola Štulić, he was the most responsible for Nisli’s first victory after around 100 days. It also has the stats to back up a good game. As many as 20 passes towards the last third of the field, no other central midfielder had that many, all together he distributed 50 balls to his teammates, again number one in his position, he came and cut off seven opponent rushes, which was why only Vošin’s Mirko Topić was ahead.

MILOŠ VIDOVIĆ (Radnički 1923) 7: Radnički waited ten years for a victory over Javor and was handed the final one by Miloš Vidović. The experienced midfielder masterfully intercepted Milutin Vidosavljević’s return ball and scored a beautiful shot from 16 meters to make it 1:0 for Kragujevac. Perhaps more importantly: he did a great job defensively and significantly helped keep Javor from scoring for the first time in the last five rounds. Vidović won a total of 10 aerial duels – the most among defensive and central midfielders – as many duels in defense and blocked the approach to the home team’s goal.

BOJICA NIKČEVIĆ (Novi Pazar) 7: Mitar Ergelaš and Andrija Majdevac were hitting for goals, but Bojica Nikčević appropriated the right side of the field and did what he wanted on it. He registered an assist, started to dribble seven times and passed all seven times, which made him the most successful among the wing players this weekend. Also had 12 successful passes in the last third of the field. His confidence seems to be growing like yeast and he could have a really great fall ahead of him.

IFET ĐAKOVAC (TSC) 7: Two goals from five shots, seven dribbles, six possessions, three in the opponent’s half of the field, 49 successful passes, 12 in the last third of the field… Bačka Topola were worried about what would happen after the departure of Mihajlo Banjac to Russia. and it took Ifet Đakovac a little time to adjust to the role of the player from whom everything starts, but it seems that he is slowly getting used to it. The Mladost players could not even catch him with a lasso, so Đakovac was a serious candidate for the round player.

SAŠA JOVANOVIĆ (TSC) 6.5: He was slowed down by an injury at the end of the summer preparations, he missed the opening two rounds, but it didn’t take long for Saša Jovanović to catch the connection and start doing what he came to Bačka Topola for, and it is to make a dar-mar on the wing. It worked very well against Mladost. He assisted one goal, sent three so-called key passes to his teammates, had two successful crosses, was generally omnipresent in the offensive part of the game…

NIKOLA ŠTULIĆ (Radnički Niš) 8: Two goals from two shots in four goals, plus a forced penalty and a red card for the opposing player. He could hardly have done more. And Nikola Štulić was spending himself defensively, putting pressure on the opponent’s defense, taking away two balls in Radnik’s half of the field, doing everything an attacker should do. Most importantly – he scored, so now he shares first place with Milan Bojović and Milan Pavkov on the list of the best scorers in the Mozzart Bet Superliga. It gains importance when it is known that Radnički scored nine goals, and Štulić as many as five. The only eight in this round of the Mozzart Bet Superliga, only the fourth in the season.