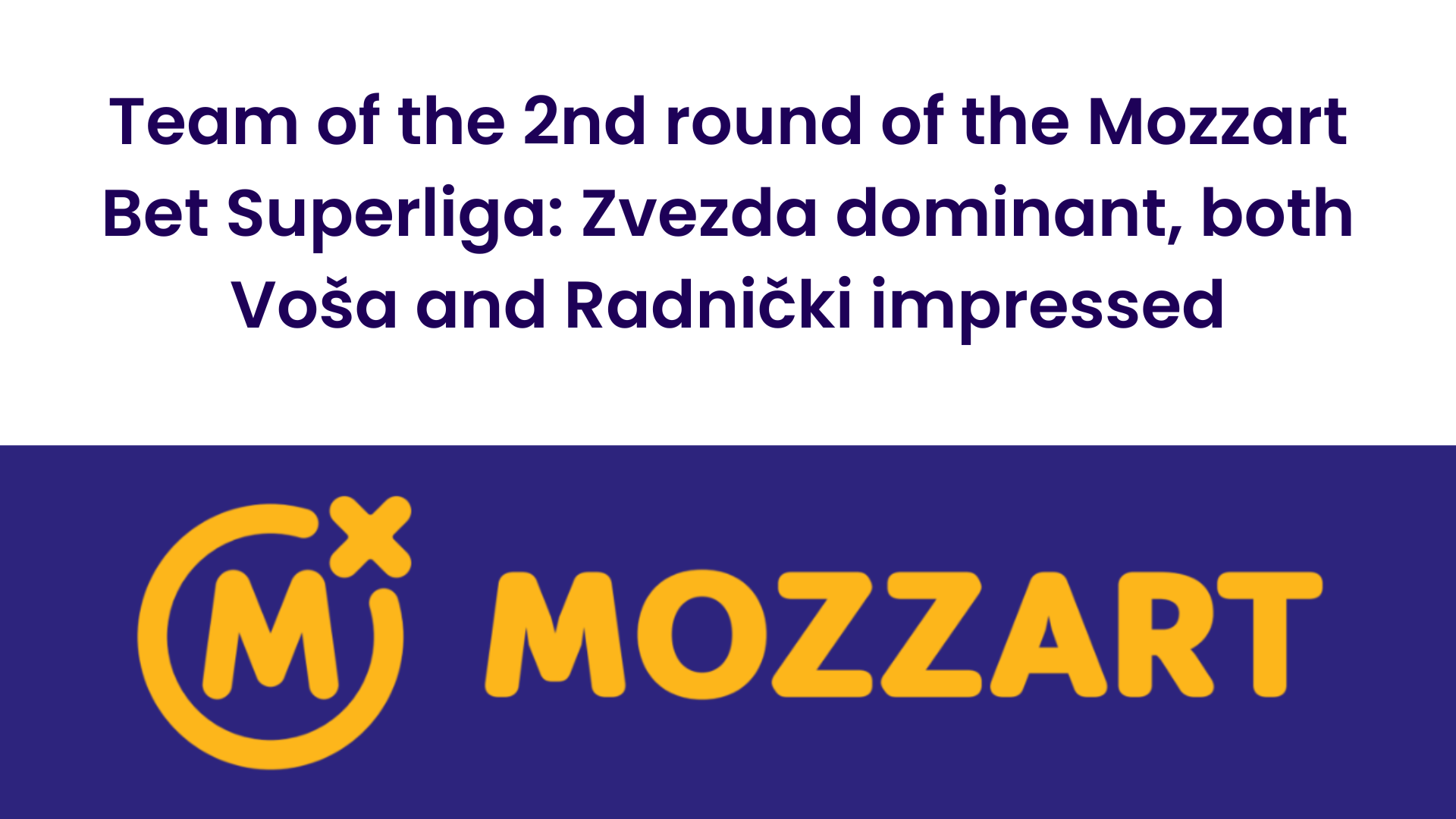 Comparisonator » Blog » Team of the 2nd round of the Mozzart Bet Superliga: Zvezda dominant, both Voša and Radnički impressed

Team of the 2nd round of the Mozzart Bet Superliga: Zvezda dominant, both Voša and Radnički impressed

Red Star showed superiority against Kolubara, Vojvodina also announces high ambitions, while Radnički from Niš presented itself in the derby match with Partizan as a team that could surprise this season, maybe even make some progress in Europe. Therefore, the players of these three teams dominate the list of the best in the second round of the Mozzart Bet Superliga.

What is particularly interesting: none of our laureates of the second round of the Mozzart Bet Superliga was a member of the ideal 11 after the first round of the competition. But let’s start in order, in the already standard 4-2-3-1 formation, a favorite among our coaches.

FILIP KLJAJIĆ (Novi Pazar) 6.5 – There was not too much competition among goalkeepers this week, as evidenced by the fact that Milan Borjan, just for example, did not even kick Kolubara on goal. That’s why this week’s award goes to Filip Kljajić, even though his Novi Pazar was defeated by Čukaricki with 1:2, but only after Muhamed Badamosi’s goal in the 88th minute. If it hadn’t been for Kljajić on goal, everything would have been over earlier.

NIKOLA STANKOVIĆ (Crvena zvezda) 6.5 – An approach that every young footballer who breaks through to the first team must have, especially if it is the first team of Crvena zvezda. Nikola Stanković is not kidding when he says: “If the boss says – I will stand for the goal”. Well, he didn’t score a goal, but he was moved from the midfielder position to the right back position and although he didn’t have many defensive duties against Kolubara – he did his job. Pride arrived to assist Milan Pavkov for the second goal of the red and white team.

MAMADU TRAORE (Vojvodina) 7 – One of the players who seriously applied for the team of the first round of the Superliga. In the second, he confirmed himself as, it seems, a full hit for Vojvodina in the summer transfer window. Did Vojvodina easily overcome their city rivals from Mladost, in large part because the defense was tight and allowed teammates from the offensive line to spread their wings.

ANTON TOLORDAVA (Radnički Niš) 7.5 – Yes, Radnički conceded three goals against Partizan, but Anton Tolordava managed to keep last season’s top scorer Mozzart Bet Superliga Rikard Gomes to zero. He did score a goal, but from a penalty that Gruzin had nothing to do with. Pride arrived in Tolordava to set up one goal, but much more importantly – he instilled security in the back. He arrived as a forced solution after injuries and health problems of stopper Radnički, but after the opening games it will be difficult to push him out of the starting line-up of the Nis club.

SLOBODAN UROŠEVIĆ (Partizan) 7 – Partizan fans cannot be satisfied with how the black and white looked in Nis, but it is at least Slobodan Urošević’s fault. Not only because of the beautiful goal with which he enabled the current vice-champion to return to the match after two goals behind. It was noticeable that the Radnicki players targeted the right side of Partizan’s defensive line. According to Urošević’s left black and white, they had significantly fewer problems.

ALEKSANDAR PEJOVIĆ (Radnički Niš) 7.5 – The English would say a player who “bloomed late”. Aleksandar Pejović has been present on the Super League pitches for a long time and domestic football fans know him well, but against Partizan he really looked like a ladybug master. He was everywhere: to patch up at the back, to bring the ball out, and even to bombard the black and white goal with missiles outside the penalty area. An excellent game by an experienced midfielder, if he continues like this in Niš, they will have something to hope for.

RADOMIR MILOSAVLJEVIĆ (Vojvodina) 7 – They announced him in Novi Sad as a big reinforcement and it seems – they hit it again. He may not be a player that catches the eye, although he started Mladost with a goal for 1:0, but he is omnipresent on the field. He is in the game, as evidenced by the data of the statistical platform Comparisonator that he participated in five successful offensive actions of Voša, as many as Gelor Kang among the last midfielders.

VELJKO SIMIĆ (Vojvodina) 7.5 – Sharpened to take over the role of the main player of Novi Sad Stara Dame. He scored for the minimum against Napredek, now poured the icing on the cake in the victory over the Mladost team. According to Comparisonator data, Pride intercepted four opponent attacks, and had contact with the ball eight times in the opponent’s penalty area. A constant threat to the rival’s goal.

ALEKSANDAR KATAI (Red Star) 7.5 – Goal and assist, above all: the unbearable ease with which he bullies the opposing players. He played against Kolubara, slalomed through the defense of the visitors from Lazarevac, scored the first goal like in indoor soccer, then assisted for another. Em effective, em gift for the eyes. Six dribbles – three successful ones, so that the people in the stands have something to applaud besides goals.

LAZAR JOVANOVIĆ (Radnički Niš) 8 – The first “eight” in our ratings in this Mozzart Bet Superliga season. He terrorized Zlatan Šehović when the latter tried to patch the channel on Partizan’s right side of the field, served Stefan Dimić as if on a platter for Nišli’s second goal, only three minutes later he himself checked Nemanja Stevanović and threw the Belgraders into a knockdown. They managed to get up, admittedly, but that does not diminish the impression that Lazar Jovanović was the absolute hero of the car.

MILAN PAVKOV (Crvena zvezda) 7.5) – In the past, he could be inert at times on the field, but he clearly entered this season eager to unseat Ricardo Gomes as the top scorer of the Mozzart Bet Superliga. At least currently, Milan Pavkov is proud of that title, after Radnički’s goal, two more Kolubaris and that in a space of six minutes. If Zvezda had not pulled their hand in the second half, there could have been more, but Milan Pavkov is giving peace to the fans for now while they wait for new newcomers in the attack.