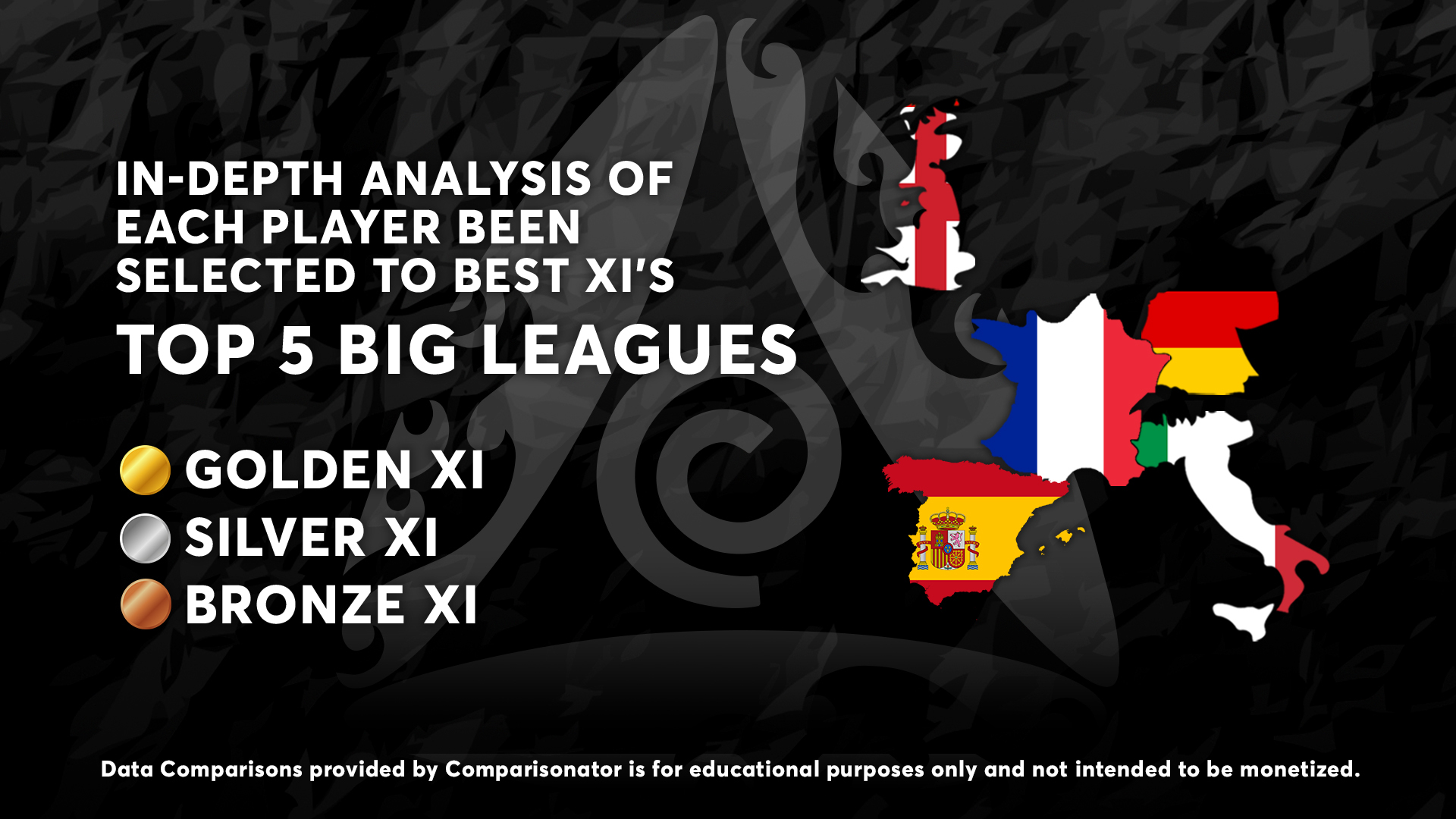 Many football people wonder why a particular player has been selected to a best 11. Each fan has a different idea, surely they watch mainly the particular team that they follow. However @comparisonator team investigates the entire data in each league. Firstly each leagues’ best players are divided in to categories according to their positions. All weights are sequenced. Secondly each leagues’ best players are compared to all other leagues position by position and listed according to their data value. After that, the main golden-silver-bronze 11’s are defined and published.

In this particular investigation; we detailed & selected each players’ best actions, defined their rankings to justify their spot in their respective best 11’s. Here are the analysis:

Comparisonator team analysed all 33 players been selected to Best Golden & Silver & Bronze XI of Top 5 Big Leagues according to Comparisonator Parameters League rankings and seasonal data of 2021-2022 seasons in Premier League, La Liga, Bundesliga, Serie A and Ligue 1 so far.

RB – Trent Alexander-Arnold: Liverpool’s successful right-back Alexander-Arnold has attracted much attention with his performance of 2 goals and 9 assists this season. In addition, with a total of 35 Shot Assists, 10 Shots on Target, 24 Successful Key Passes, 81 Successful Long Passes, and 24 Successful Crosses, he is the leader among the right-backs in the Premier League in all of these parameters.

CB – Kalidou Koulibaly: Napoli’s central-back Koulibaly has done well this season with 6.5 Ball Recoveries, 6.3 Interceptions, and 13.2 Successful Defensive Actions per 90 minutes. He also makes a significant contribution to his team in transitions from defense to attack, with 56 Successful Passes per 90 minutes and 1.2 Successful Dribbling.

CB – Virgil van Dijk: Liverpool’s star central-back Virgil van Dijk proves his defensive importance for his team with 8.9 Ball Recoveries, 6.26 Interceptions, and 1.2 Ball Recoveries in the Opponent Half per 90 minutes. He also proves that he is a two-way star player with his 4 Shot Passes, 52 Successful Long Passes, and 2.05 Expected Assists (xA) produced in total.

LB – Joao Cancelo: Joao Cancelo, one of the cornerstones of Pep Guardiola’s tactical approach in Manchester City, proves this with his performance. Showing a very successful performance this season both at right-back and left-back, Cancelo is ranked 1st among left-backs in the Premier League with 71.2 Accurate Passes per 90 minutes and 24.6 Successful Passes to Final Third. He is the leader in Offense and Shot and Shot on Target parameters.

LW – Kylian Mbappe: Kylian Mbappe played both on LW and CF this season so far. Mbappe was successful at 115 attacking actions out of 216 and 29 shots on target out of 63; he is the leader of all these four parameters. Mbappe is again the leader of both successful passes to final third (274) and received pass in Ligue 1.

CB – Dayot Upamecano: Young French defender Dayot Upamecano, transferred from RB Leipzig by Bayern Munich at the beginning of this season, was also included in our Silver 11 with his successful performance. Especially in defensive parameters, he is in 1st place among the defenders in the Bundesliga with a total of 174 Ball Recoveries and in 2nd place with 24 Ball Recoveries in the Opponent Half. He also ranks 2nd among Bundesliga central-backs in Successful Passes (77.8) and Successful Passes to Final Third (12.2) per 90 minutes.

CB – Nico Schlotterbeck: Schlotterbeck, the striking central-back of Freiburg, one of the surprise teams of the season, is in 1st place among the defenders in the Bundesliga with a total of 322 Successful Defensive Actions. In addition, Schlotterbeck’s other outstanding defensive parameters are 8.8 Ball Recoveries and 8.1 Interceptions per 90 minutes. 8 Shot Assists, 51 Successful Long Passes, and 32 Successful Attacking Actions are Schlotterbeck’s outstanding offensive stats. He is also in 2nd place among central-backs in the Bundesliga, with Defensive (144), Aerials (73), and Offensive Duels Won (46) in total.

RW – Domenico Berardi: Sassuolo’s right-winger Berardi is the leader with 8 goals, 6 assists, 52 shots, and 23 shots on target between other right-wingers players in Serie A. Berardi is 22 key passes, 14 successful key passes, and 169 received pass the second at all these parameters.

LB – Alphonso Davies: Bayern Munchen’s LB Davies is stronger in offensive parameters. Davies is the leader in shots on target (0.47 per 90 min), expected assists (0.42 per 90 min), and successful dribbles (5.6 per 90 min). He was successful at 98 attacking actions out of 179 this season so far. Also, Davies is the most offensive duels made (174) & won (97) player in Bundesliga.

CMF – Fabian Ruiz: Napoli’s CMF Ruiz is one of the most goals scored midfielders in Serie A. Fabian Ruiz is the leader of Serie A in received pass (68.12 per 90 min) and second in successful passes (69.79 per 90 min).

CMF – Conor Gallagher: Crystal Palace’s CMF player Gallagher has 30 shots; 17 of them were on target, 21 shot assists, and 6 goals, leader in all these parameters in total in Premier League between other CMFs this season so far. He is also third in expected goals with 4.77.

LW – Christopher Nkunku: RB Leipzig’s LW Nkunku has 7 goals and 5 assists in Bundesliga this season so far. Nkunku is second in successful attacking actions (5.52 per 90 min) and third in expected assists (0.64 per 90 min.) Nkunku is also second in total successful dribbles with 43.