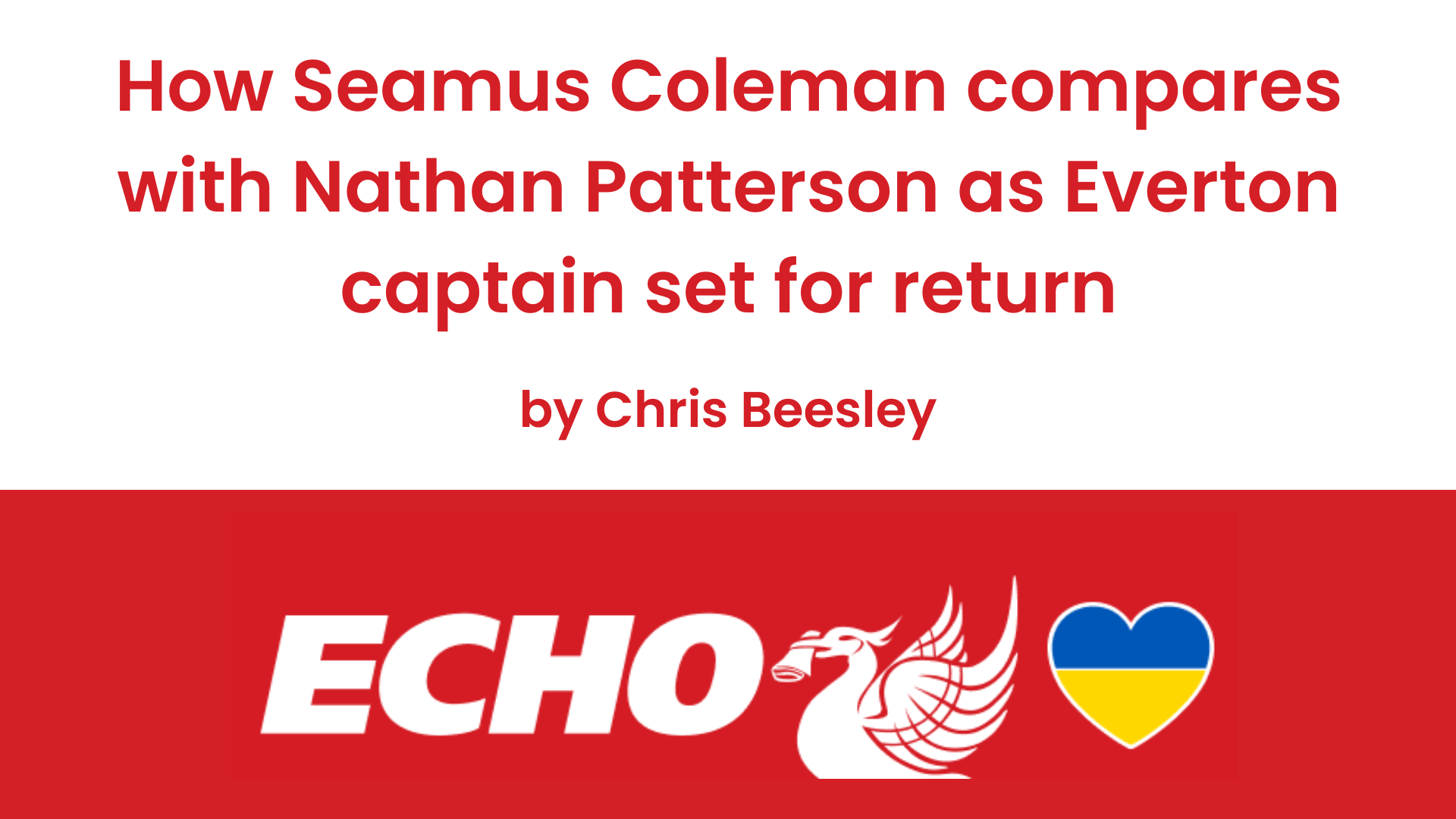 Everton captain Seamus Coleman is set to be recalled after Nathan Patterson’s injury but how do the pair’s respective numbers compare?

With Everton confirming that Nathan Patterson is facing over a month on the sidelines, Frank Lampard could turn to the longest-serving Blues player to fill the void but just how might that change how his side plays? Patterson, a £12million signing from Rangers in January, has been a revelation for Everton so far this season, starting each one of their eight games in all competitions and playing every minute in the Premier League.

However, after being forced off 26 minutes into Scotland’s 3-0 win over Ukraine at Hampden Park on September 21, the Glaswegian has subsequently visited a specialist in London about an ankle problem and is now expected to remain on the treatment table for his 21st birthday next month and with Everton playing their last fixture for six weeks at Bournemouth on November 12, Patterson has a potential race against time to return to action before the World Cup break. While other squad members might slot in out of position, Lampard has a ready-made replacement for Patterson in the shape of club captain Coleman.

Although the Republic of Ireland international – who picked up an injury in pre-season to hand Patterson his big chance – has so far been restricted to a solitary outing at Fleetwood Town in the Carabao Cup so far this term, he has played 385 matches for Everton and is fourth on the club’s all-time Premier League appearance list with 329 games to date. Until this season, Coleman, who turns 34 next month, had made the right-back position his own at the Blues for over a decade and with Patterson’s injury handing him a potential run of fixtures now throughout the autumn if he can stay fit, he could move closer towards the 26 more appearances he needs to potentially overhaul USA goalkeeper Tim Howard whose 354 Premier League matches are a record for an Everton player.

Lampard commands great respect for his skipper, proclaiming him to be “the best man I’ve ever met” in an impassioned dressing room speech after the Blues had secured their top flight status with a dramatic 3-2 comeback win over Crystal Palace in their final home game of last season but just what sort of differences in style to Everton’s system might Coleman bring if he replaces Patterson? When using Comparisonator’s Me2Others tool, an examination of the young Scot’s statistics from this season against the veteran Irishman’s to last term provides an insight into their respective strengths and weaknesses.

Looking first at their defensive parameters, Coleman actually holds on to possession slightly better with 4.7 ball losses per 90 minutes to Patterson’s 4.91, of which 1.22 are in his own half compared to 1.55. He also averages more ball recoveries (recovering the ball in a situation where neither team has possession or where the ball has been played directly to a player by an opponent) with 5.67 to 4.91 but Patterson is ahead for interceptions (5.94 to 5.14); defensive actions (17.43 to 15.98) and successful defensive actions (13.43 to 12.19).

It’s also a mixed bag when it comes to the pair’s passing as while Coleman was making more successful passes (30.98 to 28.54), Patterson was doing more with his distribution in terms of twice as many key passes (0.26 to 0.13). In terms of deliveries from out wide, Patterson has been delivering more balls in with 1.68 crosses per game to 1.22 but Coleman’s are more accurate with 0.44 successful crosses to 0.26.

While Coleman will be pleased with the way Patterson, who he will see as his long-term successor, has progressed in recent months, personal pride from the senior pro who has seen off several pretenders to his throne over the years will ensure he’s determined to show he can still cut it at the highest level after his recent spell on the bench. One of the secrets to the player’s longevity has been his stellar levels of professionalism with the man from County Donegal spelling out his ethos in an interview last summer.

He said: “I can hold my hands up and say there’s never been one training session I’ve not given 100% in. I might not have played well or trained well but I just give it my all every time.

“Whether it’s from playing Gaelic (football) or my upbringing, I don’t know, but I’m thankful for it. You’ve got to have that competitive spirit.

“To stay here for so long, it’s something I’m proud of, but it’s not something I’ve just been given, it’s something that you have to earn but I think I’ve just had that level of commitment. Right-backs have come in, plenty have come in, I welcome them and will support them when they play wholeheartedly, they’ll tell you that, but straight away you want to compete and let them know if you’re going to play then you’re going to have to train very hard and play very well because I’ll always be giving everything that I’ve got as well.”