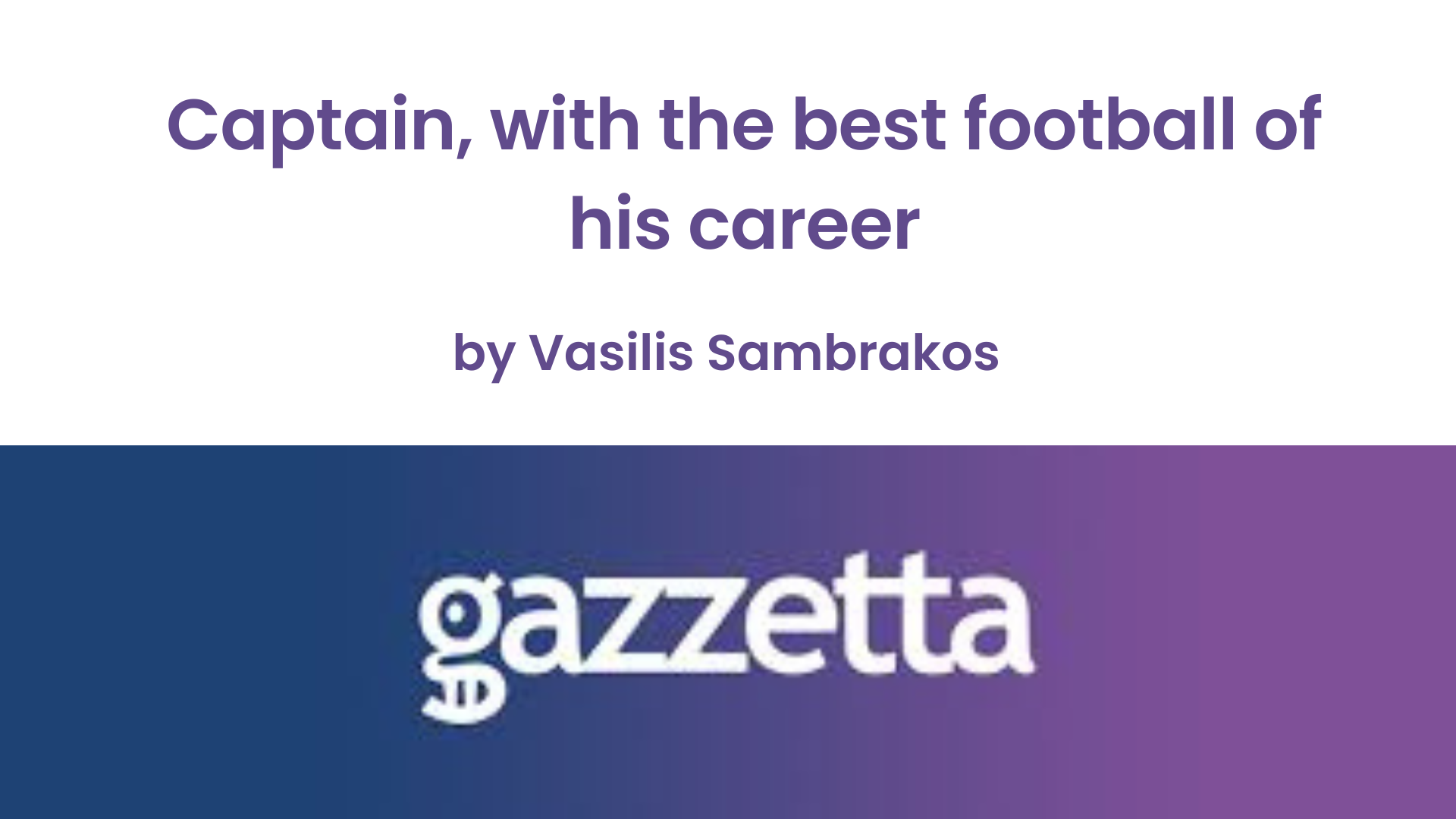 Comparisonator » Blog » Captain, with the best football of his career

Captain, with the best football of his career

Vassilis Sambrakos writes about the quality of the performance, but also about the mentality of Tasos Bakaseta.

What we saw on the pitch from Tasos Bakaseta in the first two games of the National League in the Nations League was a continuation of the season he did in Turkey with Trabzonspor. Certainly the accuracy he had in those two games (100% against Northern Ireland, 50% in Kosovo) was not his usual – because it is unreal. However, the rest of his performance indicators, i.e. the percentage of successful actions, accuracy in transfers, efficiency in duels, possession recoveries, were taken from this season. Bakasetas left Turkey as first attacking midfielder in shot assists, second in key passes, first in successful passes in the attacking third, second in possession recoveries, fifth in assists.

In other words, he is coming off a season that screams that at 29 he is playing his best or most productive football. The season that finds him at the top of the Greeks who played in any position of attack.

All of the above are reasons to admire his season and performance, and are reasons to be adored by the fans of now-Champions Trabzonspor. In this text, however, I will refer to the reasons why I am happy that he is the captain of the National Team, namely his mentality.

Bakasetas, a child hardened in a career full of moves, who did not often find a healthy football environment to have the privilege of devoting himself to football, managed to eliminate all the toxic elements and keep only the good elements, while at the same time he managed to get stronger mentally through all the adventures and build his mindset.

Bakasetas started being called up to the National Team in 2016, that is, two years after the end of her golden era. In other words, he did not have time to be introduced to the mentality of the previous ones – those who had made the successes and had the “manual”. His attitude on the pitch and his public speech off it have shown throughout these six years or so that this kid thinks with a clear mind, criticizes, self-criticizes, takes responsibility and cares to see the National team rebuild club. John Fan’t Schip had discerned these elements and wanted him as leader. Gus Poget, who is happy to have him as captain, is apparently seeing the same elements now. During these “sick years” of the national team, it was not at all easy for a footballer to keep a healthy mentality and not be corroded by the sickness of the locker room.

From his first time in the National Team, Bakasetas behaved as if he was a continuation of the previous generations in terms of mentality. Of course, he alone could not change the mentality of the national team. However, during the last 3 years or so, when the number of supporters began to increase, i.e. when, through the renewal, children appeared with a better mentality compared to their presence in the National Team, Bakaseta’s voice began to be heard, to be heard more . You understood this well from the time of the Fan’t Ship. Thanks to the efforts of several footballers, the collective culture and team spirit returned to the National Team. And today, when Gus Poget’s winning mentality is added to these figures, something is about to happen.

For Bakaseta and a number of his peers, this “new beginning” with Poget may also be their last big chance to achieve something that has to happen to the National Team before they wear its jersey – to be back in the final phase of a big event. And because today in the national team there are enough kids like Bakaseta, who put the “I” under the “we” and play for the teammate and not for individual distinction or to take the responsibility off themselves, I hope they succeed so that to set a successful example for future generations. Because now the great successes have faded so much, that we have forgotten how they were made.

At this time, when the reports record the interest of several European teams to acquire him, I really hope that this happens so that Bakasetas can have time to experience one of the top European leagues. Not only because he “deserves” it after all the “farming” he has done so far in his career, but also because a child with such a good mentality in the event that he receives even better performances will one day return to Greece with brains and experience to influence Greek football in order to change.