If Fenerbahce plays with their classical away tactics, trying to bring the ball to the wingers to cross balls to strikers in the box, they might have a chance to score. In reverse, if Black Sea Storm (Trabzonspor) tries to block the Canary (Fenerbahce) wingers by doubling the tandems in their defense, and apply fast counters, the score sheet might turn to Trabzonspor.

Compared to Trabzonspor, Fenerbahce scores more goals per match but also concedes more goals. If we base the stats for only league games, Black Sea Storm scores 1.28 goals per match versus Canarys’ 1.88 goal scoring ratio. This is a huge difference. Trabzonspor conceded 0.96 goals per match versus Fenerbahces’ 1.08. Including the cup games, Trabzonspor found 150 goal opportunity and converted 41 (27% success rate), gave away 124 goal opportunity away and conceded 32 goals. Fenerbahce has better goal opportunity creation, 206 goal opportunity created, converting 58 (28%). All the stats are very close and I would think the best option would be a draw in the result. Fenerbahce’s week point is in their penalty box area conceding 18 goals inside the box. But overall, Erol Buluts’ (Fenerbahce head coach) defense line is stronger compared to Abdullah Avci (Trabzonspor head coach). Although after former Head Coach of Turkish National Team Avcis’ Trabzonspor is fairly attractive in offense, we cannot say the same things about their defensive capability. Fenerbahces’ opportunity is more in their air defense and offense. The canaries scored 9 goals with headers, crosses coming from wingers. Trabzonspor defense is alarmingly weak in the air born balls, due to the fact that their wing-backs do not return from attacks on time, center backs usually try to cover their backs and leave open areas inside their own box. The choice of Erol Bulut whether playing Mesut or Pelkas will also affect the score.

Thiam vs Djaniny – Forward vs Forward

According to my investigation going back to previous seasons of Thiam indide the comparisonator platform, he certainly looks like anchor number 9. Although he produced majority of goals from this geography, he spends more time in wings. This drops his performance. The interesting thing is Djaniny produces better stats in the winger forward position in his past data while we see him strangely in anchor 9 position in Trabzonspor. Both players aren’t playing in their usual positions indeed. If the coaches discover this and make necessary positional amendments, the score could certainly be effected.

This parts’ most effective and noticeable parameter lays in air born attacks generated by the wingers. Most goals conceded by Trabzonspor comes from this type of play. If Head Coach Avci finds solution to this, and try to stop Fenerbahces’ wingers, he will have a better chance. “Shot Assists” and “Shots on Target” ratios favour Canaries. But vertically thinking, Trabzonspors’ dribling abilities and fast counter type of plays are fairly effective.

Black Sea Storm concedes less goals versus Canaries. But Fenerbahces’ ratios in “Ball Win in the Opposition Half” and “Total Ball Win”s are better. “Ball Losses” look very similar in both sides. Success in general defensive parameters are on Fenerbahces’ side.

Smart play making moves and parameters, amount of key passes & through passes side Trabzonspor. In reverse, Fenerbahce carries the ball to opposition 3rd better than Trabzonspor, especially with accurate long passes. When Black Sea Storm tries the long balls, they only generate many ball losses compared to Fenerbahce. 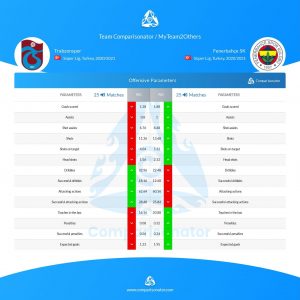 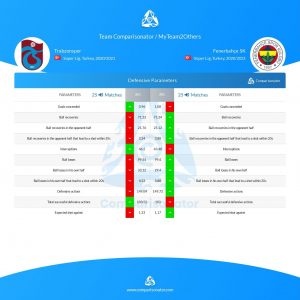 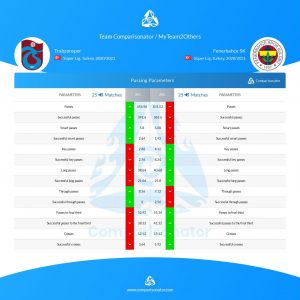 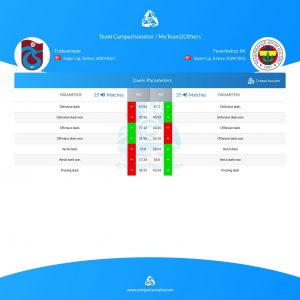