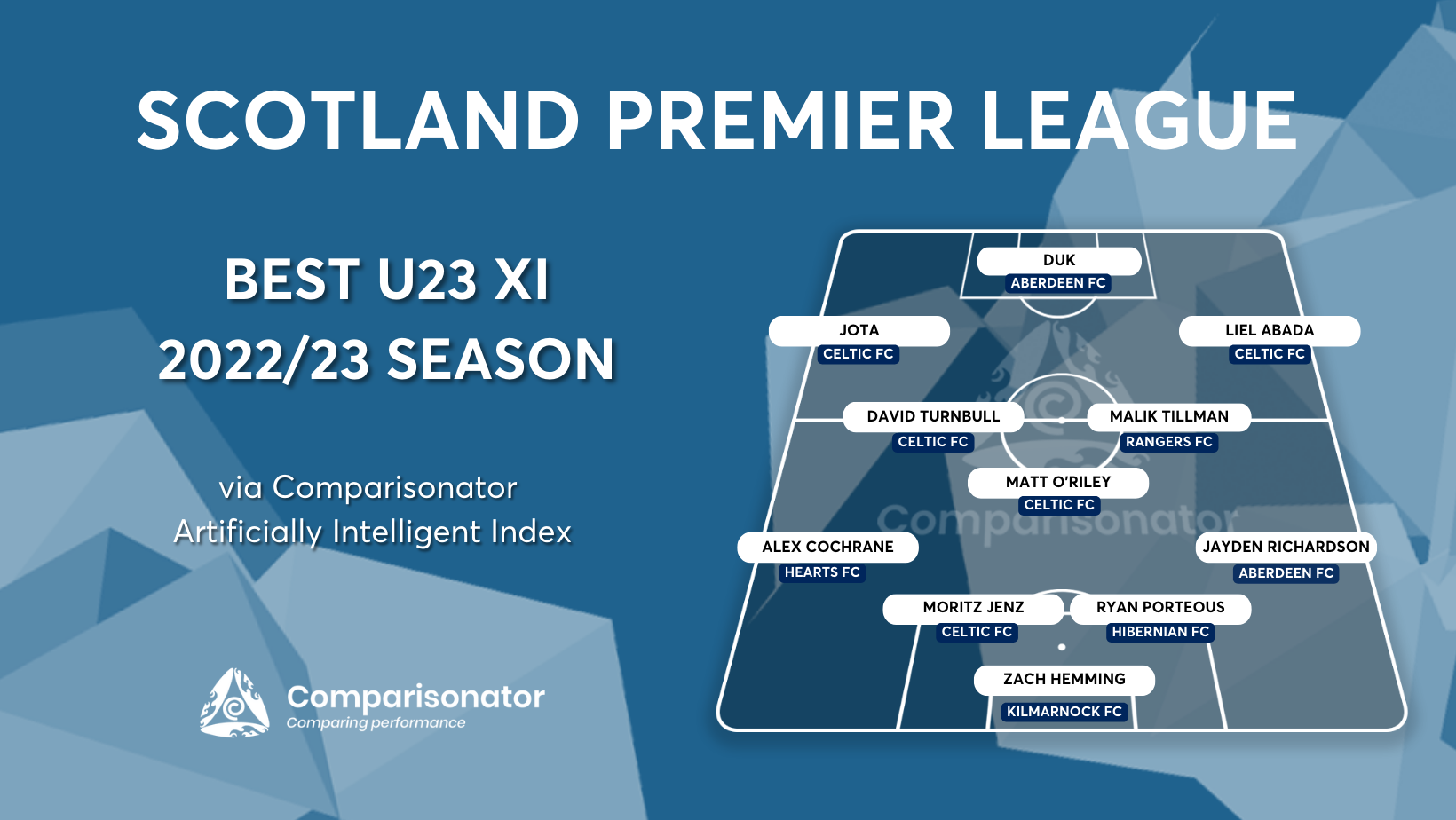 Comparisonator team analyzed the best U23 players of the Scotland Premier League in the 2022/23 Season So Far.

In goalkeeper, we have Zach Hemming of Kilmarnock FC. Hemming has been a standout performer for the Rugby Park side this season. His impressive 2.62 average shot-stopping abilities and 96% success ratio in interception attempts helped Kilmarnock to a solid mid-table position.

At right back, we have Jayden Richardson of Aberdeen FC. Richardson has been a revelation for the Dons this season, with his 40% success in crosses and 0.74 successful key passes average making him a constant threat down the right flank. He has also ranked number 1 in air challenges won in defense, and 3rd in air challenges won in the opposition half, making him a valuable asset for Jim Goodwin’s side.

In the heart of the defense, we have Ryan Porteous of Hibernian FC and Moritz Jenz of Celtic FC. Porteous has been a standout performer for Hibs this season, with his ball recoveries (6.43 per 90 min) and interceptions (5.51 per 90 min) making him a key player for Lee Johnson’s side. Jenz has been a rock at the back for Celtic, with his 9.17 average of picking-ups, 10.47 average of ball recoveries, and 87% tackles won ratio helping the Hoops to the top of the table.

At left back, we have Alex Cochrane of Hearts FC. Cochrane has been a mainstay in the Hearts side this season, with his role in attacking actions (1.49 successful attacking actions per 90 min) and amazing 90% successful dribbles ratio making him one of the best young fullbacks in the league.

In central midfield, we have Malik Tillman of Rangers FC and David Turnbull of Celtic FC. Tillman has powerful averages in duels, both ground, and air challenges, winning 43% of ground challenges and 48% of air challenges. Turnbull, meanwhile, has shown an outstanding performance in the league, the best CMF player via Comparisonator AI Manin Index and Offensive Index and also second best in Passing Index.

On the wings, we have Liel Abada of Celtic FC on the right and Jota of Celtic FC on the left. Both players are the best players in their positions via Comparisonator AI Index amongst the same position players. Abada is showing a strong performance in offensive parameters, ranking number 1 in chances (2.36 per 90 min), chances created (2.18 per 90 min), and chances converted by (0.85 per 90 min). Jota, meanwhile, has been impressive in passing parameters, especially in the oppositional half.

Overall, this is a highly talented and balanced under-23 XI, with players from all over the league represented. It is exciting to see such a high level of young talent coming through in the Scottish Premiership, and it will be interesting to see which of these players go on to have successful careers at the highest level.